For a rapidly expanding city of 9 million people, Xi’an is fortunate to have a number of temples, parks, and gardens that provide islands of green space an places for enjoyment, exercise, and contemplation. Spending day in and day out in a hotel, in an office, and in the midst of Xi’an’s sidewalks, streets, and traffic, I longed for a bit of green and a bit of quietude. So I avidly scanned my otherwise incomprehensible city map (it’s in Chinese, of course) for green spaces and made it a point to visit four of them during my two weeks in the city: the Xing Qing gardens, the Xi’an Botanic Garden, the Green Dragon Temple, and the Ba Qiao wetland reserve.

The Xing Qing gardens, just up the street (north) from the Nan Yang hotel where I was staying, was built in 1959 on the site of a Tang Dynasty lake and garden. On the days that I had a chance to walk there, I would usually try to arrive by 6am and join the morning crowds of pedestrians, exercise groups (mostly women and children), solitary stretchers (mostly men), and what seemed like thousands of others looking for a bit of calm before the work-day began. The photo at the top of this posting is deep inside the Xing Qing garden complex, whereas the one below looks out over the lake and into the irrepressible city.

I spent an afternoon at the Xi’an Botanic Garden, located southeast of the center of the city, just south of the Qu Jiang district. This beautifully laid-out garden had many lily ponds, a garden dedicated to medicinal and useful plants, and many beds of flowers being used as backdrops for wedding photos. The outdoor gardens act as an island in the city for birds – it was really the first time in two weeks that I’d seen birds other than on dinner plates or in cages singing away at the Xing Qing gardens. Finally, the greenhouse at the botanic garden feature extensive plantings of ferns, cycads, palms, and trees, including a bodhi tree (Ficus religiosa, bottom right) on which visitors have hung dozens of prayers. (click on the thumbnails for larger images). 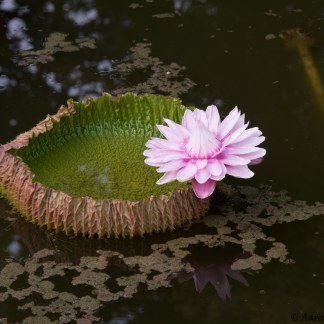 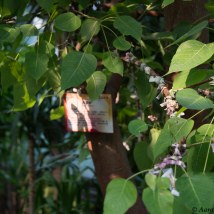 In the other direction from my hotel, and in between it and my temporary office at the Institute of Earth Environment, is the Green Dragon Temple (a.k.a. the Temple of Inspiration). This temple and gardens is reconstructed on a Sui Dynasty temple site. The rock gardens are magnificent, and like the Xing Qing gardens, affords ample space for quiet contemplation and morning exercise classes to cheerfully coexist (click on each image below to see a larger version). Apparently, the cherry blossoms in April are not to be missed! 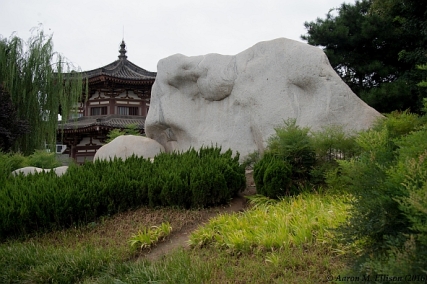 Even outside the temple walls, there is a longing for green. These cheerful frogs grace the sidewalk in front of a restaurant and next door to a car dealership.

Finally, on my last full day in Xi’an before heading off for a week visiting field sites in the Qinling Mountainsu, two graduate students (Wu Jun hua [bottom right] and Su Cui-cui) and I biked 20 km or so from the Institute to the Ba Qiao wetland reserve located northeast of the city. I wished I’d had my GoPro camera with me to capture the hair-raising, adrenaline-pumping adventure that is bicycling through a Chinese city. But we emerged unscathed, and spent a couple of hours cycling around the park itself (excellent bike paths) and walking across islands of lotus blossoms. 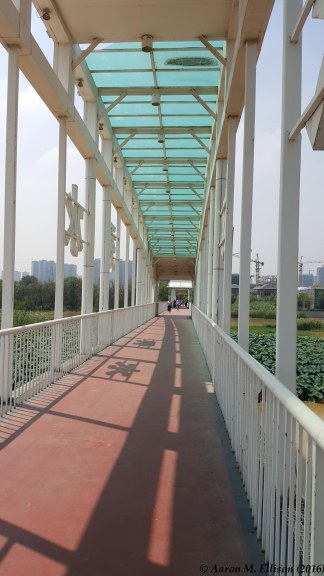 Of course, no outing would be complete without lunch! After the morning’s biking, we rode back into the city, stopping at a country-style restaurant, where we feasted on tiě guō dùn jī  (铁锅炖鸡 — chicken stewed in a large iron pot) cooked right at the table (upper right & lower photos; click for larger versions). The only thing I couldn’t figure out was where the smoke from the fire lit under the table (top left; click for a larger version) went. I couldn’t see any chimney. 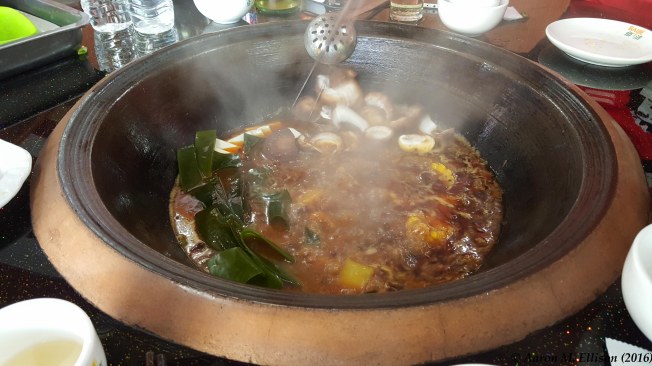 And even after the 20 km bike back from the restaurant, I was still so full from lunch that I skipped dinner!

2 thoughts on “Dispatches from Abroad: Green Spaces of Xi’an”