After two weeks in downtown Xi’an, I, along with Professor Chen Yi-ping, graduate student Chen Dong, and an indefatigable driver Liu, set out on the morning of 29 August for a 6-day road trip through the Qinling Mountains of southern Shaanxi Province, northern Sichuan Province, and Gensu Province. The goal of this excursion is to introduce me to the two subspecies of panda (the Qinling and the Sichuan), their remaining habitat, and the challenges associated with conserving this iconic endangered species.

And of course, I am hoping to actually see a giant panda!

Prior to 2013, the only time I had really paid any attention to pandas was when Ling-ling and Hsing-hsing were donated to the United States in 1972, following President Richard Nixon’s re-opening diplomatic relations with China for the first time since the Communist Revolution in 1949. And of course I am a big fan of the Kung Fu Panda movies – they’re especially good to watch on airplanes!

But in mid-2013, I started thinking about panda conservation when Professor Chen contacted me after I published a World View essay in Nature on how political boundaries can affect conservation policies. Professor Chen thought that my work on boundaries could be related to how habitat fragmentation and different Provincial (and Central Government) policies are jointly impacting panda populations in China. His email started a collaboration that has already led to our first co-authored scientific paper, which was just published in Frontiers in Ecology and the Environment, and served as the catalyst for the fellowship from the Chinese Academy of Sciences that has brought me to China this fall.

We started our journey out of Xi’an, heading first for the Louguan Taoist cultural area wherein lies the God of Wealth Temple. This modern interpretation of a major temple complex presented what I’m sure was an unintentional ironic juxtaposition of the almighty renminbi with Taoist asceticism and worldly renunciation. The architecture was impressive, statues of the gods huge, fish in the ponds hungry, and landscaping serene. Around every corner one could buy blessings (and presumably expiations), fish food, souvenirs, and snacks while being cheerfully reminded that the sage avoids attachments and worldly possessions. Of special note was finally seeing some blue sky (click on each small image to see a larger version). 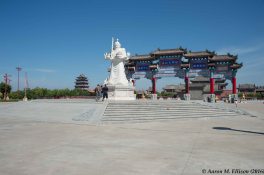 After a couple of hours imagining the glories of gaining then renouncing untold wealth, we adjourned for lunch, where we feasted on black pig – a variety of pig that, unlike its brethren who are confined to stalls, fattened for only four months, and then served up in random forms to the proletariat, instead is fed for a year on mineral water, watermelon, and other fine foods while being serenaded with music. Chen Dong commented wryly that these black pigs had a better life than did he or his fellow graduate students. Needless to say, the bacon was beyond succulent (click on each image for mouth-wateringly larger ones).

The black pig safely inside our burgeoning bellies, we checked into another ironic temple, the Tao Resort and Spa (click on each image to see what has Lao Zi spinning in his grave).

Unfortunately, we had no time for the spa, instead walking around the corner to the

Shaanxi Wild Animal Rescue and Research Center (SWARRC), one of the foremost animal conservation and breeding centers in China (or anywhere else in the world), and which is focused on the Four Treasures of the Qinling Mountains: the Golden Monkey, Golden Takin, Crested Ibis, and Giant Panda. All of these are globally endangered species, and SWARRC is the only center working with the Qinling subspecies of giant panda, of which only about 350 individuals remain in the wild.

It’s one thing, however, to have an intellectual understanding of animal rescue, research, and breeding centers. It’s a whole other thing, however, to see one. I recognize the importance of the research, and SWARRC has unparalleled success in rescuing and rehabilitating injured animals and breeding them in captivity. But I could barely hold back the tears when I came face-to-face with the reality that these animals, and their offspring, will probably never be able to be “re-wilded”. The animals are too acclimated to living in the center and could not fend for themselves outside of their cages and enclosures, even if sufficient habitat remained for them in the mountains. These were not the pandas I had hoped to see, and I ended this first day on the road sad and depressed, and the hotel dinner didn’t provide any relief (click to weep). 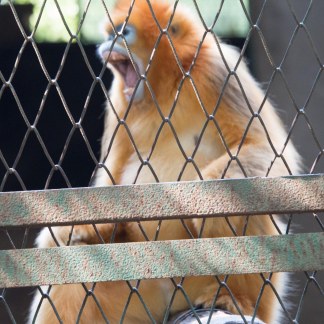 With the brief blue Sunday interlude in the rear-view mirror, Monday’s sky returned to its normal milky-yellowish white pallor.

After my by-now usual in-room breakfast of tea and fruit, Chen Dong and I set off for a morning walk up the hill in the reserve behind the Tao resort. Evading the hawkers who encouraged a horseback ride up the hill or a curbside breakfast, we walked steadily upward a couple of kilometers to the top. At the final overlooks, one could light incense, tie blessings to trees, pray to Lao Zi, have another meal, or buy souvenirs. 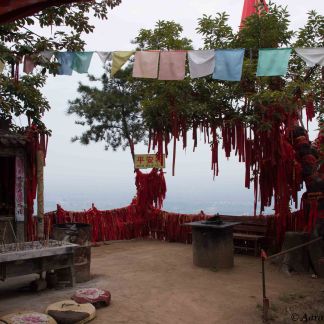 We did get a hazy view of SWARRC, which from above looked more humane and luxurious than the Tao resort. My depression of the previous day began to lift.

By the time we had descended the hill, passing a grove of bamboo where >100 species have been planted and are being studied, it was nearly 11am, and it was time to set out for the Foping National Natural Area (FNNA)… after lunch, of course (or rather, 4 courses). 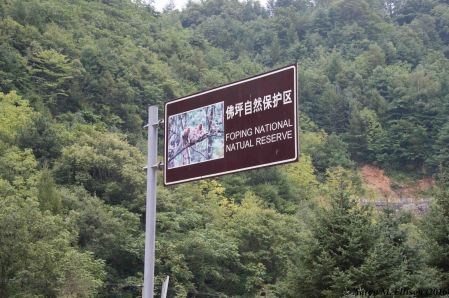 Foping is high in the Qinling Mountains, and the panda reserve, set in a large valley, is off-limits to people.

Which is just as well, because where people try to coexist with pandas in the buffer area of the NNA, it’s more like Panda World than a world for pandas.

We did, however, get to see Qi-zi, China’s one brown panda, born at SWARRC in 1985 and on permanent loan to the Foping Panda Tourist Park (still under construction). Understandably, as she was destined to live her life in a theme park, Qi-zi was a bit sullen, but she gamely loped around for the happy tourists before settling back down in her corner with another apple. 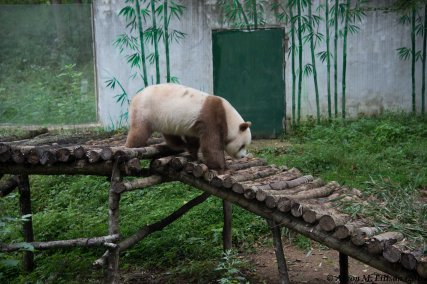 We drove up a road-under-construction that is cutting the buffer zone in half, from which we got good views of the reserve and the road construction itself, before turning around and heading back to the main road (the G108), which itself cuts through the FNNA buffer zone.

After leaving the reserve, we descended down the south side of the East-West trending Qinling Mountains, arriving around 7pm in the city of Hanzhong. By then, the air was so thick with smog that my eyes were burning despite the air conditioning in the car.

After checking into the Ace International Hotel, we walked down the block to join the throngs slurping hotpot.

The next morning, we proceeded on south to Chengdu to visit their panda breeding center and see the Sichuan subspecies of giant panda.

Tuesday’s sky resembled week-old clotted cream. The 5-hr, 420-km journey to Chengdu was punctuated be the requisite, albeit unusually nondescript, lunch stop and we arrived in Chengdu around 3pm. After a quick visit to the Chengdu zoo to see their two pandas (Sichuan subspecies; and no, despite the overabundant hotpots, that is NOT a photo of me on the right!), we continued on to the Chengdu panda breeding center. 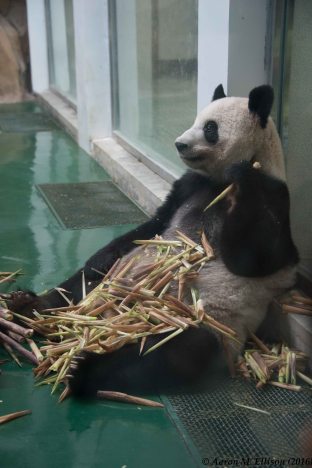 This center, the largest of its kind in China, is a real gem. The pandas have large, semi-natural enclosures, the off-season visitor load is relatively light, and the pandas were moderately active. The high points were watching a couple of 2-year old pandas wrestling and vocalizing, and seeing a nursery crib with 8 two-month old cubs (click on the images to be overwhelmed with cuteness).. 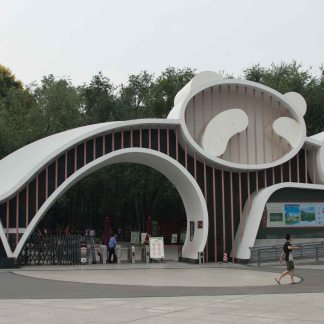 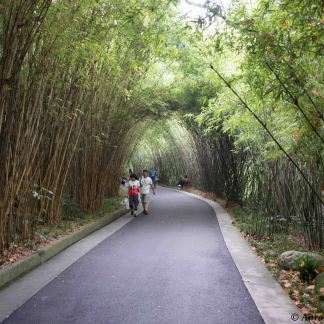 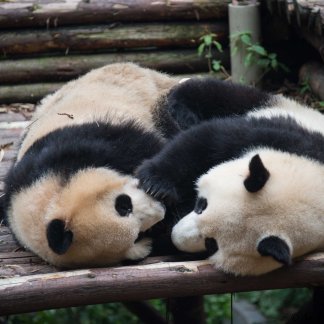 Although all are still captives (with stud records prominently displayed), Chengdu is, in so many ways, a very long way from Shaanxi. 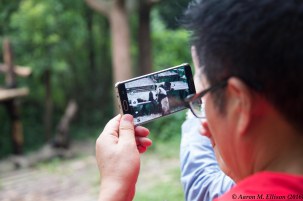 Over another hotpot dinner, I reflected on what does all this mean for the future of the giant panda? Conservation options are constrained by four axes of geography – geological, historical, ecological, and political – all of which will interact in as yet unpredictable ways with ongoing climatic change. Popular sentiment here and throughout the world is clearly on the panda’s side, but if I were a betting man, I  wouldn’t give strong odds to the panda’s long-term prospects anywhere in China outside of zoos and research/breeding centers.

4 thoughts on “The unBalanced ecoLOGist Abroad: In the Footsteps of the Giant Panda (I)”

Follow The Unbalanced Ecologist on WordPress.com
Join 2,193 other followers