Well, I had hoped to finish writing my last post about Valparaiso before I left for another around-the-world journey, but… here I am in Khartoum, on the east bank of the Nile, and one must live—and write—in the present.

I left Boston for the long trip to Khartoum on the afternoon of Tuesday the 31st of January, just a few days after “45” (he-whose-name-shall-not-be-written) issued the now-stayed executive order banning immigration from seven countries, one of which is Sudan; ironically, and barely noted by the media, two decades of economic sanctions imposed by the US on Sudan had been lifted by President Obama a fortnight earlier, apparently with the agreement of incoming-45. My itinerary took me from Boston to New York to Frankfurt to Cairo to Khartoum, where I arrived at 03:30 local time on Thursday, about 32 hours, and four on-time flights (thanks JetBlue, Singapore Air, and EgyptAir!) after I had checked in at Boston. I was met plane-side on the tarmac by my hosts from the University of Khartoum School of Forestry, passed rapidly through Sudan’s passport control (far more rapidly than I expect to get through US CBP—given the two-page Sudanese visa that now graces the middle of my passport—when I return to LAX in mid-March after my sequential trips to Germany and Australia that follow my stay in Sudan), had a nice cup of tea in the VIP lounge, and finally settled in, around 05:00, at the University of Khartoum Guest House. My colleague, host, and former Ph.D. student, Asst. Prof. Ahmed Siddig of the Forestry School at the University of Khartoum, thoughtfully laid in a few snacks to tide me over until breakfast the same day. Although I slept through until 13:30, barely having enough time to scarf down a quick lunch before my first meeting (click on an image to see larger ones). 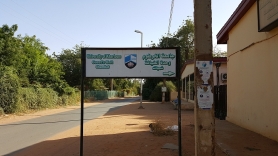 Entrance to the U of K Guest House 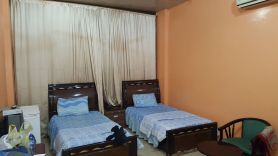 END_OF_DOCUMENT_TOKEN_TO_BE_REPLACED

With but ten days to go before I leave for another extended overseas trip (a six-week journey that is taking me to Sudan, Germany, and Australia), I’m still catching up on visions of Valparaiso. This post has a small parallel with the incredible displays of political energy in yesterday’s marches all over the US and around the world, in which good people everywhere spoke out against the forces of darkness threatening us all.

As I wrote in my last post, Valparaiso gives me hope. Long a hotbed of activism, activists, artists, and art, Valparaiso (and much of Chile) was in the midst of a municipal workers’ strike while I was there in November, a strike in protest of the inequitable private pension system that was set up in 1981 under the military dictatorship of Augusto Pinochet. As a visiting researcher and occasional tourist, I learned some things about the underlying issues, and also witnessed one of its impacts on a central attraction of the city—its ascensores.

END_OF_DOCUMENT_TOKEN_TO_BE_REPLACED

Two months ago, I watched the US election returns on my laptop in a hotel room on the harbor of Valparaiso, a gem of a city in Chile, an inspiring country. Along with 51% of the 58% of the electorate who took time to vote (the lowest turnout since 1996), I sat in disbelief as the predictive arrow on the home page of the New York Times swung from rationality to chaos, much as I had done four months earlier watching the citizens of the United Kingdom vote to leave the European Union. In post-Brexit July, I found solace in the old-growth of Oregon. In post-truth November, I was in a country that, like many others in Latin America, overcame decades of U.S. interference in its domestic policy and indeed, its elections; endured nearly two decades of a post-U.S.-sponsored military coup (in 1973 on, of all days, 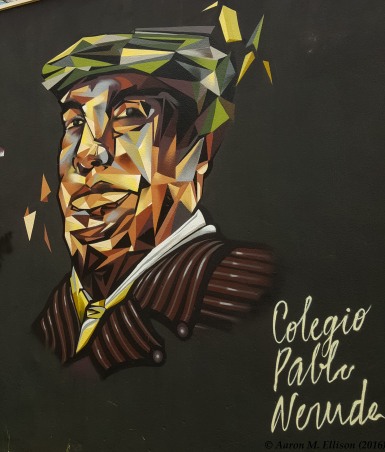 September 11); the subsequent suicide of its democratically-elected president Salvador Allende, dictatorship, death squads, and disappearances; and has emerged as a vibrant democratic country, albeit not one without its own issues and challenges.

Vaparaiso—the birthplace of Allende (and the dictator who overthrew him, Augusto Pinochet), the adopted home of Chile’s own Nobel Laureate, Pablo Neruda (who died two weeks after Allende, likely at the hands of the military junta)—and the eventual re-emergence of democracy and civil society in Chile, are two reasons I do not despair at the upcoming inauguration of the 45th president of the United States.

But enough about politics. Here’s Part I of some random recollections—mostly photos—of Valparaiso.

END_OF_DOCUMENT_TOKEN_TO_BE_REPLACED

Less than two weeks ago, I was sweating on the equator, where there’s no snow and the Christmas decor of Santas, elves, and reindeer seems vaguely out of place. Now I’m back in Massachusetts, where there’s a little of the white stuff (although most melted out in yesterday’s driving rain) and re-learning my way around the American landscape I’ve been away from since late July.

Apparently, one of the big issues facing the good citizens of our republic in this transitional era is whether one should say “Merry Christmas” or “Happy Holidays”. Fivethirtyeight.com even did a post on this vexing question. Living as I do in the northeast, I’ve usually gone along with my local majority, which shares exuberant Christmas displays with “Happy Holidays.” But the ground appears to be shifting a bit here in Massachusetts.

END_OF_DOCUMENT_TOKEN_TO_BE_REPLACED

Perched in the São Paulo airport, in between Belém and Houston, thence to Boston, my 14-month sabbatical is coming to what seems an all-to-soon close. But it has been an awesome year, capped by a really excellent two-and-a-half weeks working with Rogério Silva, mostly in the rainforest at Caxiuanã. But Belém deserves mention, too. A sprawling, filthy, and yet exuberant city of more than 2 million people perched near the mouth of the Amazon River, it has a waterfront with pedestrian esplanades, museums and forts, working docks, and an iron market with all sorts of delicacies from the Amazon basin. And at least one superb restaurant. In this post, I share four of my most notable memories of Belém: a cool breeze, the flanelas, the iron market/waterfront, and a dinner out.

END_OF_DOCUMENT_TOKEN_TO_BE_REPLACED

Today is our last day of field work at the Ferreira Penna Field Station in the Caxiuanã National Forest Reserve, and as it will be some time before we have all the data analyzed and written up, I thought I’d share some pictures and videos from the last ten days of ants and ant ecologists in the field.

END_OF_DOCUMENT_TOKEN_TO_BE_REPLACED

Having spent the better part of two weeks moving down the Amazon River from Tabatinga to Belém, I’m now in the midst of the last 2-1/2 weeks of my year-long sabbatical leave, working on all things ants with my friend and colleague Rogério Silva at the Museu Paraense Emilio Goeldi. Rogério and I have been working on ecological similarities and differences between temperate and tropical ants. He’s visited me twice at Harvard Forest and now, with support from the Museum in Belém, I have an opportunity to learn first-hand about the ants of the Brazilian rainforest.

But first we have to get there.

END_OF_DOCUMENT_TOKEN_TO_BE_REPLACED

This is the second part of my reflections on the 2016 US presidential election. As with Part I (“An Elegy for my Home”), I emphasize that these are personal reflections and opinions; the writing is incomplete and unpolished. I welcome constructive engagement, discussion, and dialogue about them; please post comments here, on Twitter, or send me email.

END_OF_DOCUMENT_TOKEN_TO_BE_REPLACED

Ashore in Belém after five days and four nights on the Amazon and its tributaries on board the Amazon Star, here’s the travel-blog of what I though would be my final trip on the Amazon. But in truth, I’ll head back upriver on Wednesday for 11 days of field work… more on that coming up!

Up at dawn, lock the duffel, stow the laptop, scarf down fruit, granola, chocolate cake, and tea at the Go-Inn Manaus buffet, and head for the river.

END_OF_DOCUMENT_TOKEN_TO_BE_REPLACED

While washed up in Manaus, I’ve taken a few hours to catch up on some recent papers in the (technical) ecological literature. A new paper by Egbert van Nes et al. in the most recent issue of Trends in Ecology and Evolution caught my attention. Entitled “What do you mean, ‘tipping point’?“, van Nes et al. encapsulate well the competing ideas and definitions of tipping points in the ecological and broader literature, but then end up arguing for a broad definition: “any situation where accelerating change caused by positive feedback drives the system to a new state.” But they then go on to say that their “proposed definition essentially boils down to the necessary conditions for [Malcom] Gladwell’s examples where a small initial change makes a big difference.”

I think this is unfortunate. They give too much credence to Gladwell’s sloppy handling of tipping points in his book, their  broad definition will lead to a proliferation of “tipping points,” and such vagueness can only result in so much watering down of the term as to render it meaningless.

So with that in mind, I offer up for today’s posting an essay I wrote three years ago but never published. I post it here, unedited from 11 September 2013 (albeit with a few [editorial clarifications]). Perhaps an updated version could find a broader audience somewhere; suggestions welcome!

On tipping points, regime shifts, and the balance of nature

“Five-nine” doesn’t have quite the cadence as “nine-eleven,” but when we look back on the early 21st century, May 9, 2013—the day that the concentration of carbon dioxide (CO2) in the atmosphere exceeded 400 parts per million (ppm) for the first time in recorded history—may be seen as a far more important date than September 11, 2001. If the scenario described in the Scientific Consensus on Maintaining Humanity’s Life Support Systems in the 21st Century by Anthony Barnowsky and his colleagues at Berkeley[1], along with more than 500 other scientists, including Nobel laureates, members of the National Academies of Sciences, and other luminaries is true, Five-nine will be seen as the long-anticipated tipping point whereby human impacts have caused irrevocable harm to our planet. Or perhaps not. Perhaps there is still time to take the concrete, immediate actions Barnowsky et al. suggest—suggestions echoed by President Barack Obama in his June 25 [2013] speech at Georgetown University—that would ensure a sustainable, high-quality future. Or maybe we’ll just keep muddling along, slowly and steadily acclimating to our new lives on a now unfamiliar world, which, to distinguish it from our familiar “Earth,” Bill McKibben christened “Planet Eaarth”: durably, sturdily, stably, hardily, and robustly.