Perched in the São Paulo airport, in between Belém and Houston, thence to Boston, my 14-month sabbatical is coming to what seems an all-to-soon close. But it has been an awesome year, capped by a really excellent two-and-a-half weeks working with Rogério Silva, mostly in the rainforest at Caxiuanã. But Belém deserves mention, too. A sprawling, filthy, and yet exuberant city of more than 2 million people perched near the mouth of the Amazon River, it has a waterfront with pedestrian esplanades, museums and forts, working docks, and an iron market with all sorts of delicacies from the Amazon basin. And at least one superb restaurant. In this post, I share four of my most notable memories of Belém: a cool breeze, the flanelas, the iron market/waterfront, and a dinner out.

Rogério’s apartment is on the 12th floor of a 14-story apartment building with a nice view of the city at sunrise. Even though it normally was well above 30 C during  the day and only a little cooler at night, the breeze blew pleasantly cool throughout the day and evening, and it was rarely necessary to run the air-conditioner in the guest-room (that is also the study of Emilia, his spouse and fellow myrmecologist). Conveniently located about equidistant to the Museu Paraense Emílio Goeldi where Rogério works, the harbor and the market, and the airport, and walking distance to a supermarket for fresh fruit and the Bosque Rodrigues Alves (a 1.4 km2 remant of original, at least 500-year-old tropical forest), it was a great place from which to appreciate the city.

In praise of the flanelas

Given the 20-minute driving distances from the apartment to any of the above locations, I spent a lot of time in cars or taxis practicing my meditation skills. Driving in Brazilian traffic is not for the faint-hearted, and I’m glad that there are people who do it professionally. As I also experienced in China, the traffic in Belém moves relatively slowly, flows around pedestrians, bicycles, push-carts, motorbikes, and other cars, and accidents appear to be relatively rare. Parking, though is always a challenge—there is never enough, especially when you need it.

In Belém, as in Manaus, in Chile, and, I was told, in Argentina, in areas where parking is at a premium, the cars are shepherded to parking spots and subsequently watched over by individuals, usually men, who collect small change for their efforts. In Brazil, these men are called flanelas (the flannels) because of the small cotton rags they use to wave the cars into a parking place. Throughout Brazil, as well as in Chile, the flanelas charge what the markets will bear: about 500 Pesos in Chile (about US 80¢) and 1 Real in Brazil (about US 30¢). 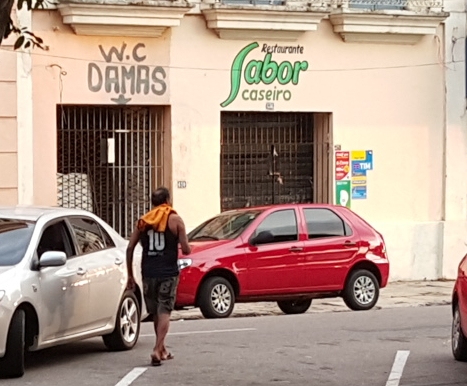 Uniquely, it appeared, in Belém, they were organized into a union, with many of the flanelas wearing orange vests proclaiming their membership in the Sindicato do guardar autos.
This also seemed to determine the average distance—usually less than a city block—between successive flanelas; Rogério and I contemplated initiating a study of territoriality among flanelas much like we used baits to determine foraging radii of ants. Maybe next year…

Most of our meals in Belém were home-cooked—fruit, eggs, toast, sandwiches—but for the last night, after a walk around the by that time of evening closed Bosque Rodrigues Alves, we went to dinner at Remanso do Bosque, a wonderful restaurant across from the park that is consistently rated among the top 50 restaurants in Latin America: it was ranked #44 in 2016. 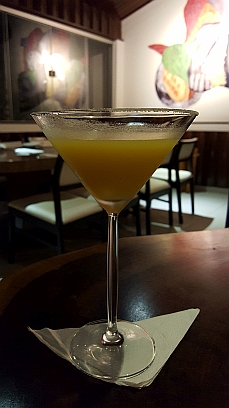 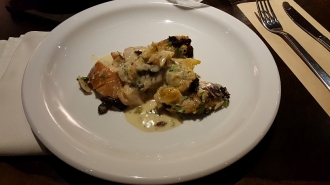 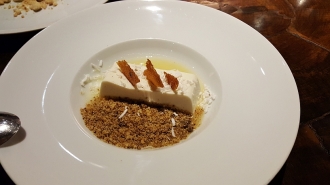 I started with a surprisingly strong taparebá (Spondias mombin for the botanists) margarita, with tequila and Cointreau to accompany shrimp breaded in tapioca and served with a chicory aioli, olive oil, and pepper-sauce. For the main, I had smoked Pirarucu (the giant Amazonian catfish, Arapaima gigas, which attains lengths of up to 3 m) cooked in coconut milk, with bananas fried in butter and chestnuts, accompanied by white rice and ground chestnut meal. Rogério had the baked Pescada Amarela (Cynoscion acoupa, one of the few saltwater fish commonly eaten in the Amazon) accompanied by potatoes, tomatoes, onions and roasted pumpkin, and dressed with olive oil and just a dash of tucupi (bitter extract of manioc root). For desert, I had the Amazonian vanilla Panna Cotta with cupuaçu (Theobroma grandiflorum) sauce, cane sugar thins, and grated fresh coconut, while Rogério had the banana crumble with chestnuts and tapioca sorbet (click on any of the above images to see mouth-watering larger ones). Every dish was beautifully prepared and presented, and a pleasure to savor and eat.

This morning—my last in Belém—we went down to the waterfront at 6am to see the fish on display in the iron market. Built at the end of the 19th century and restored in 1985, this is the place to see the big fish of the Amazon, and to see where last night’s meal came from (click on any of the images to see larger ones). 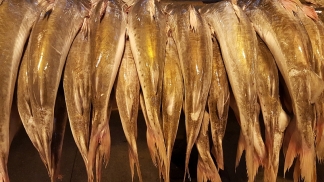 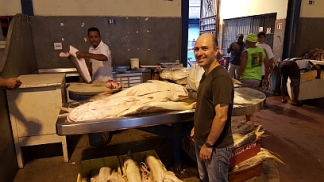 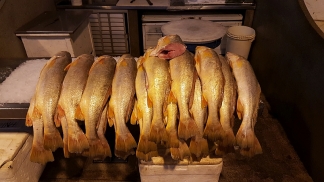 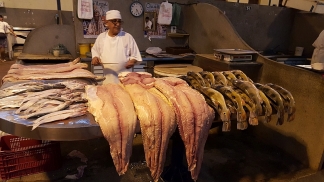 These include Belém’s prized Filhote (Brachyplatystoma filamentosum) and Pescada amarela (Cynoscion acoupa), Manaus’s preferred Tambqui (Colossoma macropomum), Leticia/Tabatinga’s Pirarucu (Arapaima gigas), as well as Dourada (Blachyplatystoma rouseeauxii) and Tucunaré (any of a number of Cichlis species). Some, such as Tambaqui, are farmed, whereas others are still wild-caught in the river or ocean. The volume of fish passing through this market every day is truly incredible, and it’s no wonder that fish stocks everywhere, including the Amazon, are in decline.

After our walk through the market and a stop to buy papayas (the best I’ve ever had) for breakfast and passion fruit (maracujá) for juicing for lunch, we walked down to the waterfront to see the old fort and the smaller of the two cathedrals in Belém (click on any of the images to see larger ones). 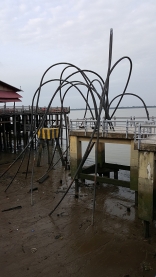 The original fort of Feliz Lusitania

And then it was back for breakfast, finish packing, and head for the airport – Belém to São Paulo to Houston to Boston.

So what’s next for this unbalanced ecologist?

Although my sabbatical has ended, this blog will not. I’ll continue to use The unBalanced ecoLOGist to explore ideas and themes related to ecology and the environment, and Dispatches from Abroad to chronicle my travels not only outside of the US but also, given the new sociocultural-political landscape I expect to find on my return tomorrow, inside it as well.