I’m on my last week of nine here in China, and for new and unforgettable experiences, it’s been pretty extraordinary. It’s not everyday one is deliberately set afire!

The week in Kunming started out like most other weeks here. Meals, seminars, meals, meetings, meals, working on manuscripts with my colleagues, and yes, more meals. Three days in a row now I’ve had awesome lunches at 外婆味道 (Wàipó wèidào; literally “Grandmother’s Taste”), a Kunming restaurant with about 20 branches around town that specializes in food your (Chinese) grandmother would have made, and notable for its low-salt, low-oil dishes. They also have lots of vegetarian dishes, which my friend and colleague Wen Xiujun and I really appreciate… although the thinly-sliced beef dry-sautéed with red chili peppers and processed Pu-er tea leaves was exceptional enough that I asked the chef how he made it so I can try it (albeit with tofu, or maybe duck) once I get back home. 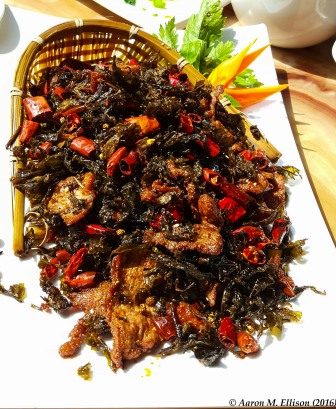 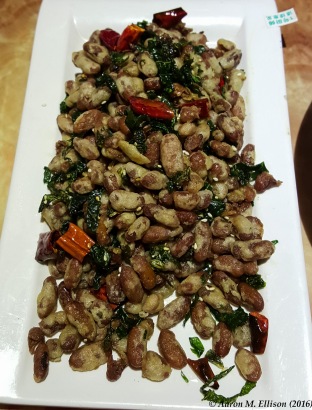 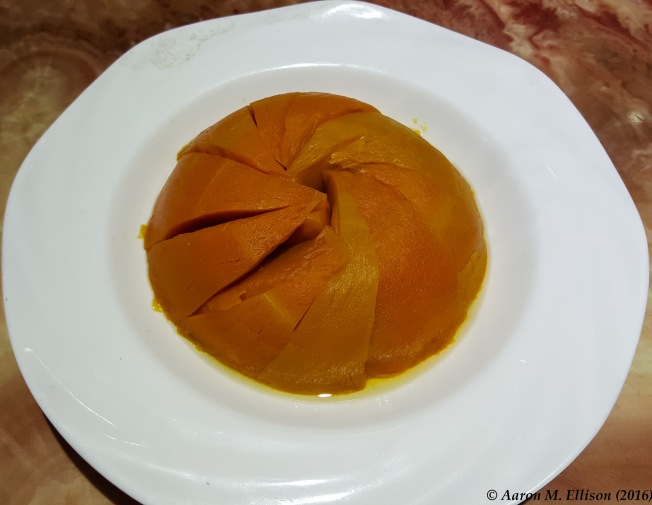 In addition to the delectables above (clockwise from top left: beef with pu-er tea, crispy scarlet runner beans, and steamed pumpkin prettily cut), I’ve had tofu three ways (including “bagged” tofu – brownish  semi-crisp on the outside, creamy on the inside), a variety of greens, and plenty of buckwheat “tea”.

On Monday after lunch, Xiujun walked me two store fronts down the street to a day-spa for a 90-minute massage. After 8-1/2 weeks here, working on my laptop at non-ergonomic desks, bouncing in land rovers, speeding in trains with short chairs, and crammed into airplanes,  there are a lot of knots to undo. And like everything else here in China, the spa is big – at least 5 floors, myriad rooms with 2-6 recliners per room, showers, snack bars, etc. – and efficiently managed. On entry, we get a wristlet with a computer chip, which is used by the masseuse to log us in, clock the time, and run the bill.

The massage was a full-body experience. Shoulders and back, head and face, arms, feet, and lower legs. The masseuse uses all his/her hands, feet, and limbs to work over every inch of flesh ordered from the menu and keyed into the computer. Of course, the masseuses didn’t speak any English, so Xiujun did the ordering for both of us and the translating for me. The novelty this day was having the soles of my feet cupped.

Between lunch, the spa, and a short walk to the nearby Lianhuachi Park, that basically toasted Monday (click on any of the photos below to see larger versions in a slide show). 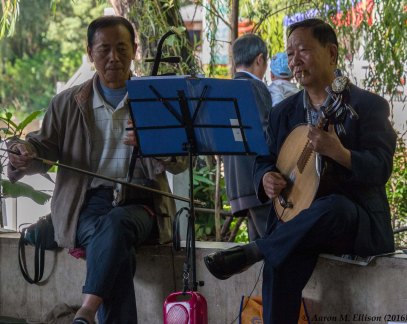 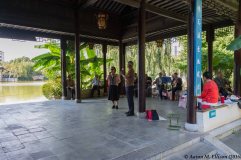 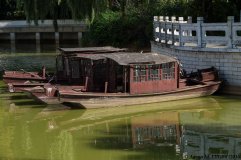 Except, of course, for dinner, which Sam Ma, his students, and I enjoyed at a Vietnamese restaurant in a mall in the center of town. This dinner was notable for what it was not – Chinese food – the first non-Chinese-food meal I’ve had in over two months! We discussed over a dinner of spring rolls and sweet rice balls the apparent fact that the Chinese rarely eat anything other than Chinese food (although that itself is a misnomer, as each region and province has its own specialties, making it impossible to really identify a monolithic “Chinese” food), and will often bring noodles, rice, etc. with them when traveling outside of China.

Tuesday was fascinating on two counts. I spent the morning at the Provincial Department of Science and Technology meeting with the Director-General to talk about how to clean up the heavily polluted and eutrophic Dianchi Lake just outside of Kunming while maintaining the nearby tourism and medical industries, as well as managing the overall development in the region. Of course they are interested in further international collaboration… 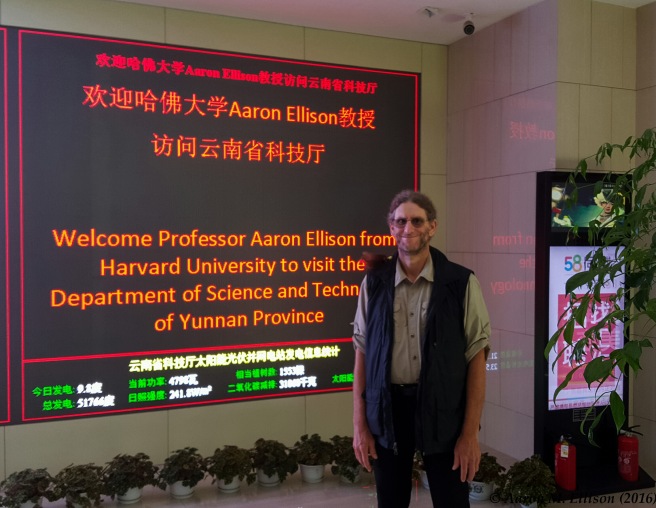 But perhaps more importantly for me, this meeting, which was far more about politics and social dynamics than it was about science, occurred just as an op-ed I had written about the need for scientists to get more involved in politics appeared in Nature (read it here). So I felt like I was starting to actually practice what I had just written about – certainly an odd feeling for a pointy-headed ivory-tower intellectual! Which helped that aforementioned beef with tea leaves go down that much better!

Today, Sam was tied up with visitors at the Kunming Institute of Zoology, so Xiujun and I took a 2-km walk to the Green Lake park. This lake system, originally fed by nine springs, was a jewel of the Tang Dynasty, but now it’s, well, mostly green. And while pleasant to walk around, had many of the familiar trappings of Chinese city parks. Amusements for children, modern reconstructions of historic pagodas, tea-houses and food stalls, souvenir stands, bounce houses, and a heavily eutrophied lake system. I did, however, get to see my first Chinese squirrel (click on any of the images below to see larger ones in a slide show). 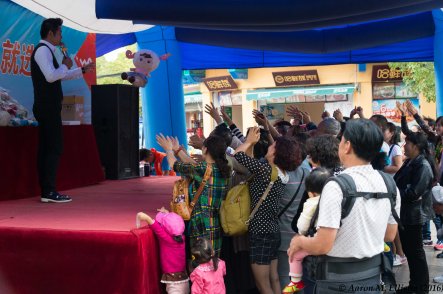 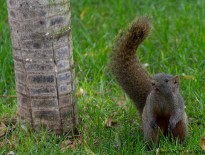 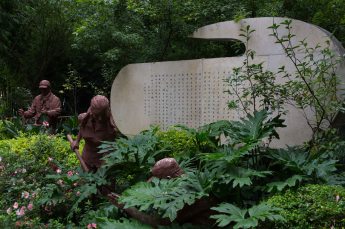 Entrance to the Bamboo Grove 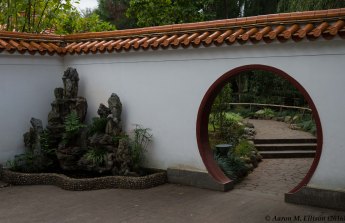 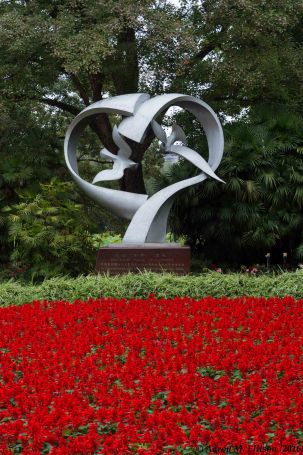 After the morning walk, it was back to Grandmother’s for lunch, and then, much to my amazement, another day-spa (Xiujun having bought a pre-paid card on Monday). Like Monday’s, this one began with the head, went down the arms, then onto the feet (cupped again), but then… we lay face down on the now-prone recliners while our backs were nicely massaged and oiled. Then, after Xiujun warned me that it was going to get a bit warm and that I shouldn’t move, we were swaddled in at least two, maybe three layers of towels that had been soaked in alcohol. Which were then lit. They flamed for a couple of minutes while heating my oiled back (click either one to see them larger). 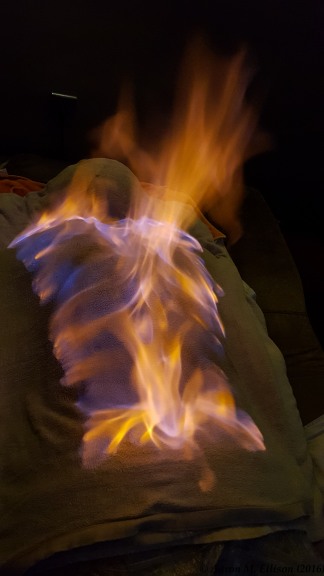 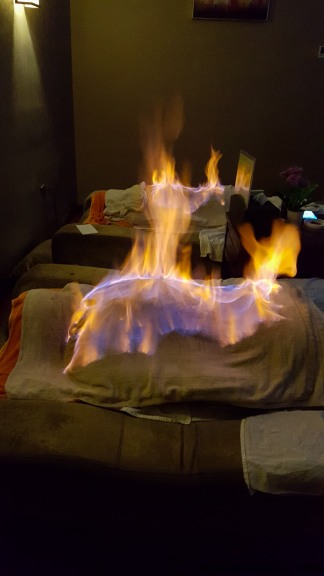 Aaron (front) Xiujun (back) on fire

After the fires were put out with water and more damp towels, and we had cooled down a bit, we were wrapped in plastic wrap and left to chill out until we were ready to shower and head back to the hotel.

So now I know what it feels like to be the marshmallow in a ‘smore!

One thought on “Dispatches from Abroad: A Kunming Conflagration”