I’ve been in China for over seven weeks now, and as a people-watcher and photographer, nothing has caught my eye more than the panoply of three-wheeled vehicles meandering the roads. When I was a college student in the late 1970s studying Chinese, there were virtually no cars in China; just shy of 40 years later, BMWs outnumber bicycles in many Chinese cities, and the two-wheelers once pushed by peds on pedals are now mostly electrified. But through it all, the trikes remain, anachronistic work-horses that fill the gaps between bikes and BYDs, Vespas and Teslas.

I spent a few hours this afternoon—my last in Beijing before I move on to Kunming tomorrow morning—walking the streets and alleys, photographing three-wheelers, and reflecting on stasis and evolution in transportation systems.

Tricycles are everywhere but little noticed. They weave in between the cars and trucks like wraiths from another dimension. Some are electrified, many are push-pedal-powered, some are covered, others or open, virtually all seem to be held together with bailing wire and packing tape, and a fair number appear to have given up their ghosts. And they each have their own personality, usually reflected in their driver.

Tricycles are proletarian vehicles. They deliver express packages; haul garbage, flowers, or wood; serve as pop-up food stands; and in some cases appear to be carrying every worldly possession of the driver. No two are the same, and all look like they’ve been on the road since before there even were roads. They’re also remarkably efficient. The majority of the powered ones have been converted from small gasoline engines to smaller electric motors, and although neither moves significantly faster than the push-pedal ones, they get where they need to go and arrive on time. They’re small enough to fit in the bike lanes and escape the traffic jams but large enough that the cars need to slow down for them when they’re on the road. They’re not subject to the road-rationing that, in an attempt to reduce air pollution in Beijing, limits both the number of registered fossil-fuel powered cars and trucks, and the days of the week on which they can be operated within the city. They are a blast from the past, and if China is serious about reducing its air pollution and its global contribution to atmospheric carbon dioxide, tricycles may be the future of China’s low-carbon transportation and local freight delivery system.

Here’s a sampler of Beijing tricycles (click on any of the images to start the slide show). 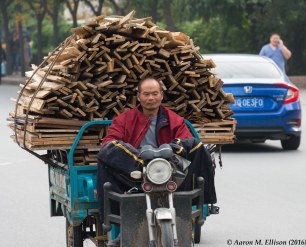 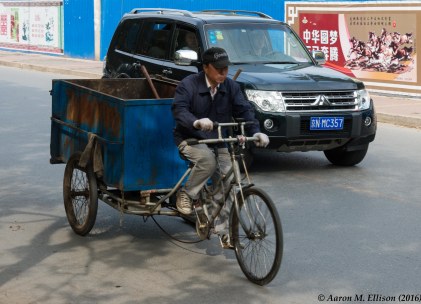 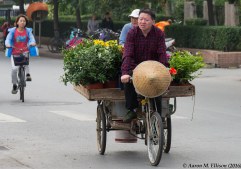 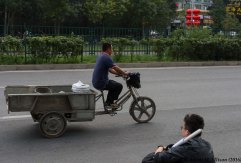 Next up: my favorite photos from Beijing!