It’s been almost a week since I’ve found any time to write a post from China. As I wrote last week, I left Beijing on Monday for Shenyang: the first four days of what has now turned into a 10-day, 9-lecture typhoon (yes indeed, a lot of hot air swirling around!) / movable feast (click on any image to view larger ones in a slide show). 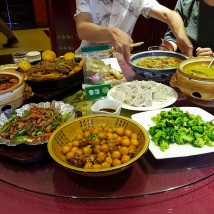 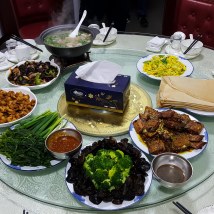 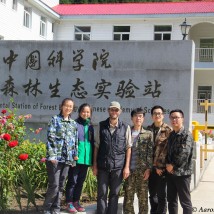 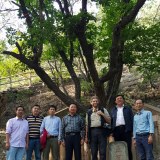 Brothers at the Five Brothers Oak 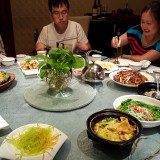 Monday morning started bright and early on the 08:00 fast train from Beijing’s South railway station to Shenyang’s north station. Moving along at a brisk 300 km/h, and allowing for one stop, plus time to accelerate and decelerate, we covered the 1000 km rail distance in a scant 4 hours (only because the train goes around the mountains in between. From May 2017, when the tunnel through the mountains is completed, the distance will fall to 600 km, and the time to 2 hours or so).

I also learned, while watching the English-language version of Chinese television news, that in the last six years, China has built 20,000 km of high-speed rail lines (from a starting point of 0), that another 10,000 km will be finished by 2020, and another 10,000 km by 2025. This network covers the entire country, was designed and built in less than a decade, and over the most recent three-day Mid-Autumn festival, moved more than 300,000,000 people, all precisely on schedule. Is it worth asking why, in 2016, the USA, which has about the same land area and spatial extent as does China, has – you guessed it – 0 km of high-speed rail (no, the Acela, which putzes along at 90 mph on a good day doesn’t count) and no plans to build any anytime soon? Maybe it’s because we work in miles, not kilometers…

But I have wandered off-track, here (pun intended, of course).

Upon arriving in Shenyang, precisely at noon, as scheduled, I was whisked off to the CAS Institute of Applied Ecology and – you guessed right again – lunch. Although I would have been happy with a simple bowl of rice with a few vegetables, our group, including Prof. Zhu Jiaojun, my host and Deputy Director of the Chinese Academy of Science’s Institute of Applied Ecology; Director of the Qingyuan Forest Research Station Yan Qiaoling; and colleagues Professor Gao Tian (Shenyang Agricultural University), Professor and Associate Dean Liu Hongyan (Peking University); Professor Liang Eryuan; and me, walked across campus to the Zhangyuanwai restaurant for the first of several banquets.

In addition to the 10-course for eight people feast (including, on the left, clockwise starting with broccoli with garlic, jiao zi dumplings, potatoes in sauce, pork and vegetables, tomato and mo-er soup, grilled fish with corn fritters, fried eggplant, vegetable soup, beef soup), they also brought out a 30-cm-wide loaf of bread (right), conveniently scored (but not cut through) to allow for ripping apart with chopsticks. Knives being nowhere in sight.

After lunch, Eryuan, Hongyan, and I all gave talks introducing our work to our colleagues at Shenyang. Then, around 3:30, we all hopped into a Land Rover for the 3-hour drive northeast to the Qingyuan Forest Research Station, part of the Chinese Ecological Research Network (CERN), where we arrived after dark – but just in time for dinner.

Another monumental meal, this one most notable for the local version of the jianbing. Although this Liaoning provincial specialty tasted nothing like the Beijing-version-recently-transplanted-to-New-York-City that has been all the rage among eastern US foodies, I was assured both by  Jiaojun and Eryuan that the buckwheat-pancake enveloping raw scallions, local greens, scrambled eggs, and fermented soybean paste was, in fact, the original, real McCoy of jianbings. And really, who am I to argue? 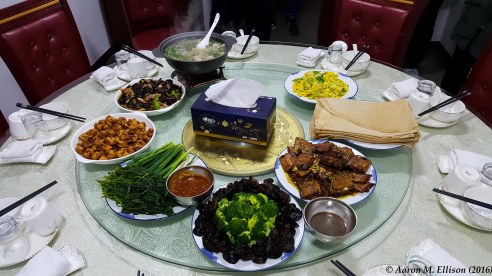 After dinner, a walk outside revealed actual stars in the sky (the first I’ve seen in five weeks); a walk through the lab revealed state-of-the-art equipment side-by-side with large numbers of well-catalogued field samples and an awesome record of soil samples; and last an hour of ping-pong helped work off the calories before a well-earned night’s sleep.

Tuesday dawned bright and brisk, the morning temperature running well below 10 C. Following a relatively formal introduction to the field station, we took a short walk through the woods to see the range of larch and Korean pine plantations, gap-dynamics and seed-dispersal experiments, animal behavior arenas, and hydrological monitoring stations. The overall site reminded me a lot of Harvard Forest – similar latitude, forest tree genera, and attention to experimental ecology and land-use history. 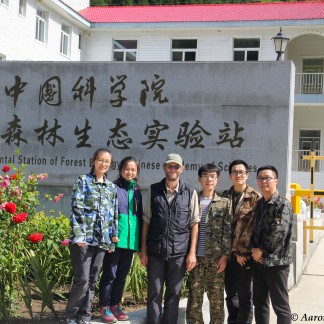 And then, back in the Land Rover for the drive back to Shenyang for a late afternoon reprise of Monday’s talks at Shenyang Agricultural University, another dinner, and what felt like a brief nap before Wednesday’s field trip.

Which was towards the north-northwest, on the other side of the tracks, just across the Liaoning border into Inner Mongolia, at the Daqinggou Field Station of the Institute of Applied Ecology. 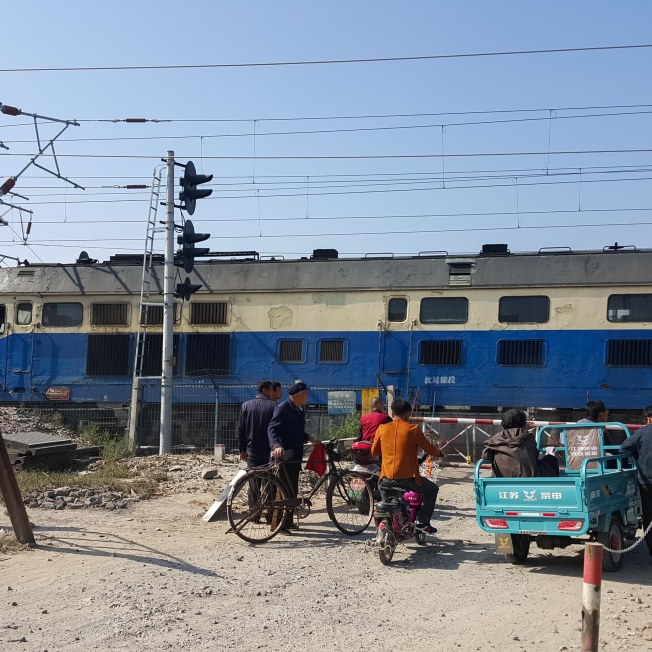 The various graduate students and researchers at Daqinggou took us to see their field experiments, including precipitation manipulations, effects of leaf litter and overstory composition on soil microbe community structure and decomposition dynamics, and relationship between drought and sapflow. All interesting, of course, but more notable was the presence on this field trip of the provincial vice-governor, lead manager for land-use planning, and lead manager for forestry, all of whom are keenly interested in applying the findings of IAE-CAS and Daqinggou researchers to manage the extensive forests and grasslands in the province.

They also hosted a fabulous lunch at a local Mongolian-style restaurant. The main beverage was milk-tea, and the range of dishes included sausages (with an actual knife, albeit a dull one, with which to to cut them), racks of lamb, Mongolian sauerkraut soup, and my favorite – deep-fried cheese curds dipped in honey – all served in the shadow of local hero Genghis Khan. 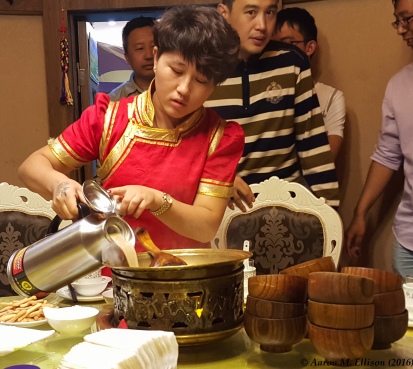 After lunch, we spent a few hours at the Daqinggou Geopark, site of an amazing “sunken” or “underground” forest, which is actually a forest within a long, deep canyon. The canyon is more than 100-m deep, and hosts a diverse range of native trees and herbs that take advantage of the additional water here that percolates up to the surface from underground springs.

A nice overview of the landscape was available from the top of the local observation tower, modeled after Paris’s Eiffel Tower. From here, we not only could see the forest, but also what remains of the town (about 300 families) that was allowed to stay after the park was created. 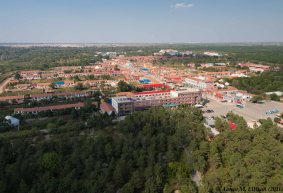 We walked down a huge flight of concrete and tile stairs to the bottom of the canyon, and spent a very pleasant couple of hours walking through the forest. The trees were huge, the forest cool and damp, and the company pleasant. 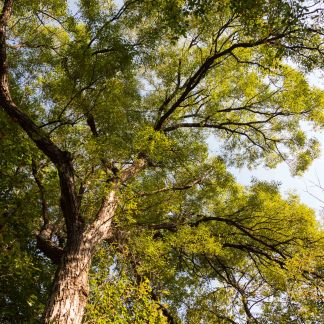 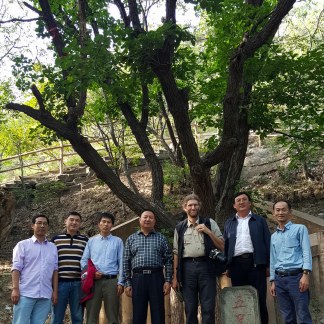 On the way back, we happened on some 大麻 (da ma) plants, whose seeds are apparently useful as a digestive aid! 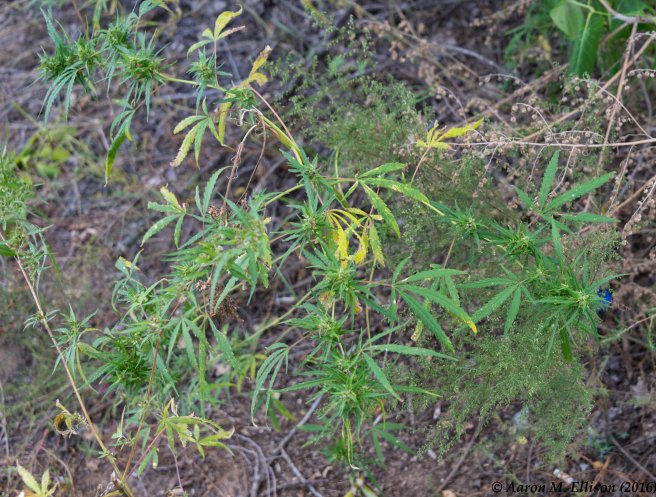 And then, the long drive back to Shenyang, a short sleep, and a Thursday morning train back to Beijing.